In an episode of the .NET Rocks podcast, guest Bryan Hunter describes his experience analyzing a large object-oriented code base. It’s a good listen. The problems with it were the same problems you see with all large O-O code bases, he says. But one module was a complete surprise because…there were no problems. The application had zero downtime in 4 years of operation. The team was even able to do “hot loading” to deploy updates while the application was running. What was the difference? This module was written in Erlang, a functional language. 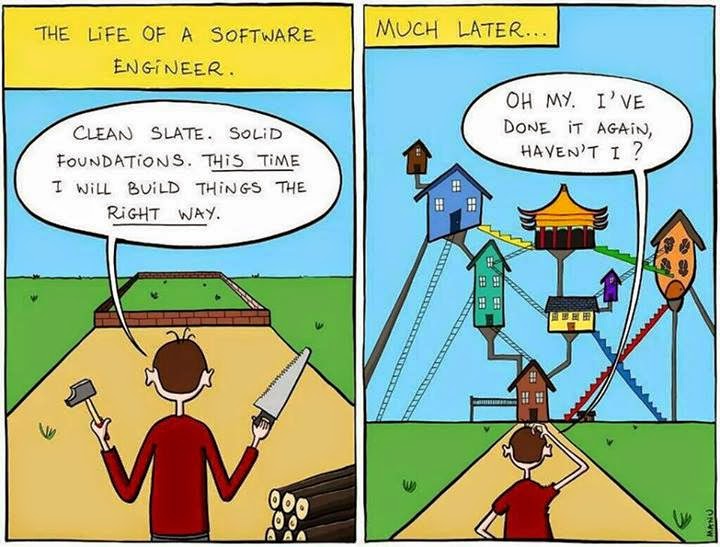 Life of a software engineer. I believe the original source is http://www.bonkersworld.net/building-software/

Whenever you build an enterprise-scale project, you will find yourself using a bare minimum of libraries and patterns such that despite your best intentions – or even because of your best intentions – your solution will be complex and tricky to maintain from moment one. It’s a terrible life we lead where following best practices feels bad and wrong. Functional programming may be the answer.

I’ve begun to learn .NET’s own functional programming language, F#. I wouldn’t call the language mainstream, but it’s not a toy, either. It’s completely compatible with the rest of the .NET class library so one can make WPF or ASP.NET MVC applications with it. I hope that it will one day lead to a more satisfying experience developing enterprise applications.